e·vent cre·a·tor (/əˈvent//krēˈādər/): An event creator coordinates the creation and development of small and/or large-scale personal or corporate events such as festivals, conferences, ceremonies, weddings, formal parties, concerts, or conventions.

When I was a student at Bridgewater State University (then "College"), one of the positions that I held was as a member of the Programming Committee. As I worked on various initiatives, I learned about planning events, booking talent, dealing with riders, coordinating sets, and more. As a senior, I independently planned my own event on campus called "Hip-Hop for the Homeless. More below.

In 2019, singer/songwriter Louie Bello and I planned and pulled off an amazing industry night at my design studio in Boston. More below.

Sometimes you just want to throw a party.

Singer/songwriter Louie Bello and I attend a lot of events in our great city of Boston, both together and  separately. They are a mix of charity events, fundraisers, release parties, premiers, nights to raise money for a non-profit, or to celebrate the new issue of a magazine, network with our peers and more. We both love causes and support so many initiatives but decided together “What if we organized a private acoustic show at my design studio… just to have a party?”

We had a red carpet, a bar provided by Skrewball Wiskey and Charles Street Liquors. An amazing spread from celebrity chef Travis Talbot and Granary Tavern’s Executive Chef, Zack Osborn. Louie performed with sister Lisa Bello and we even had a surprise guest appearance  from members of the America’s Got Talent finalists, Sons of Serendip, who were attending as guests.

The night was such a success that we planned and sent out invitations for the next show, scheduled for April 2020. As you probably guessed, we ended up postponing that show until “a later date TBD”. 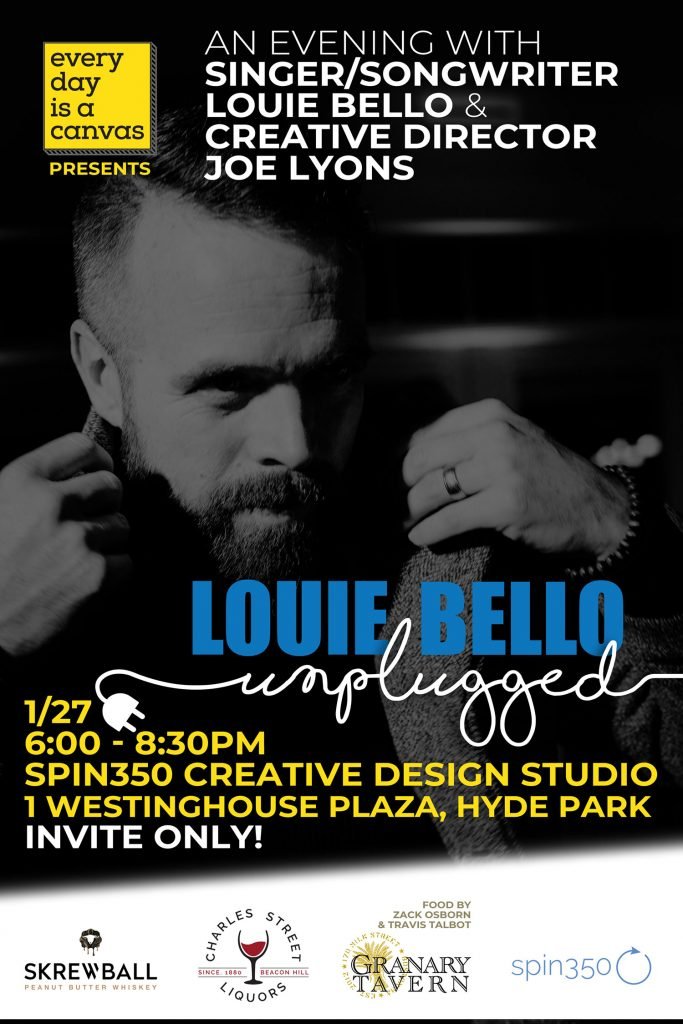 Hip-Hop Fest For The Homeless 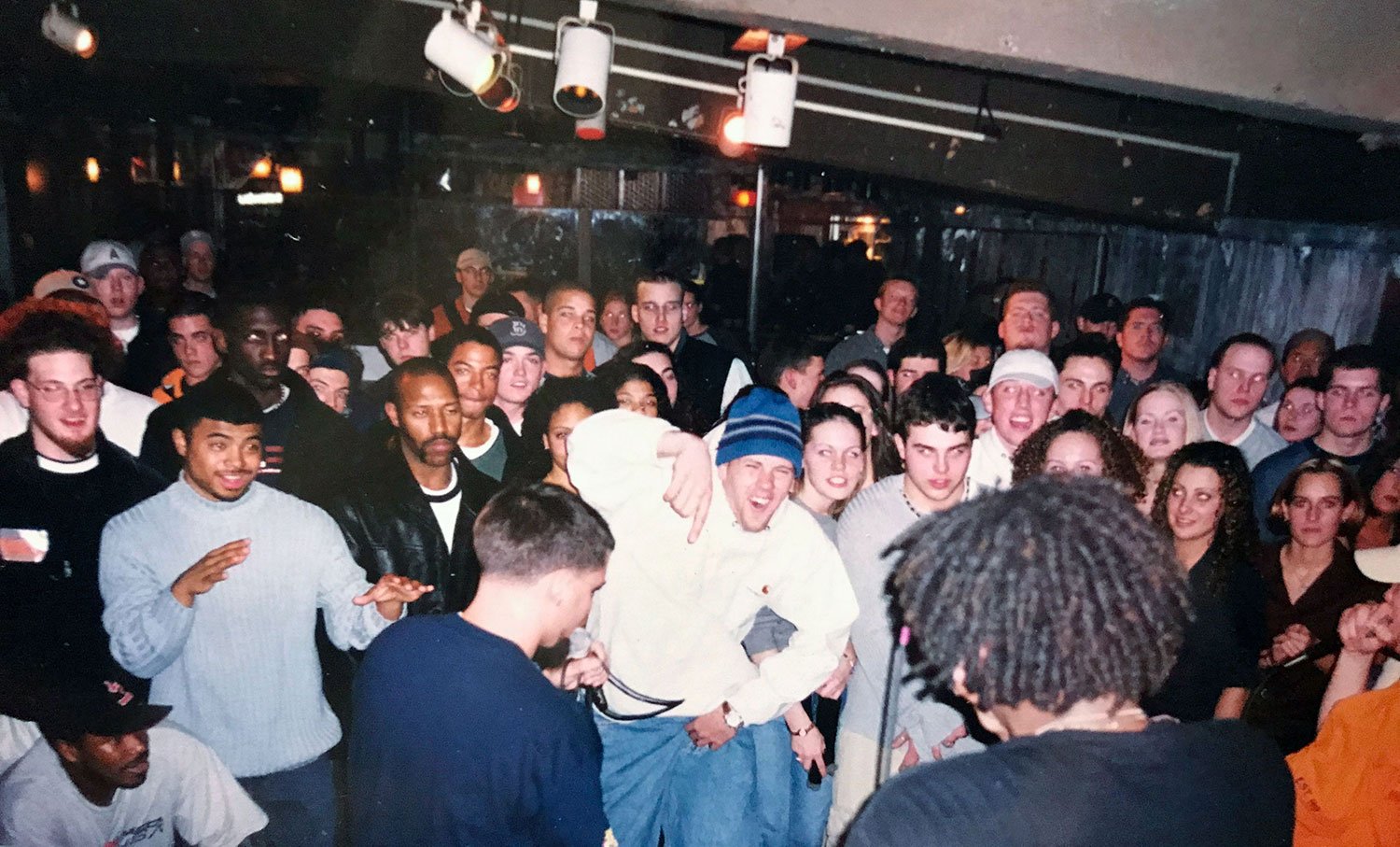 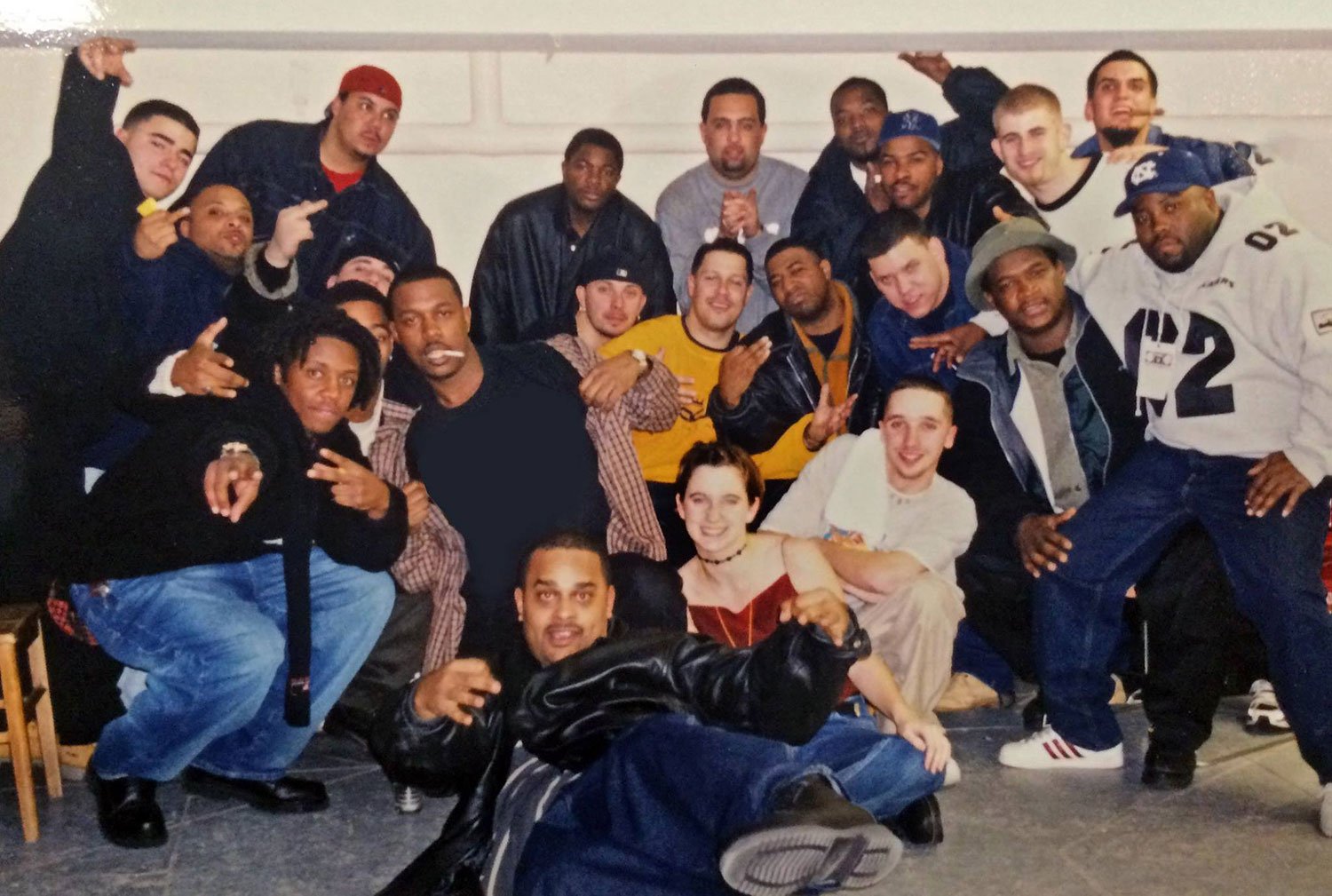 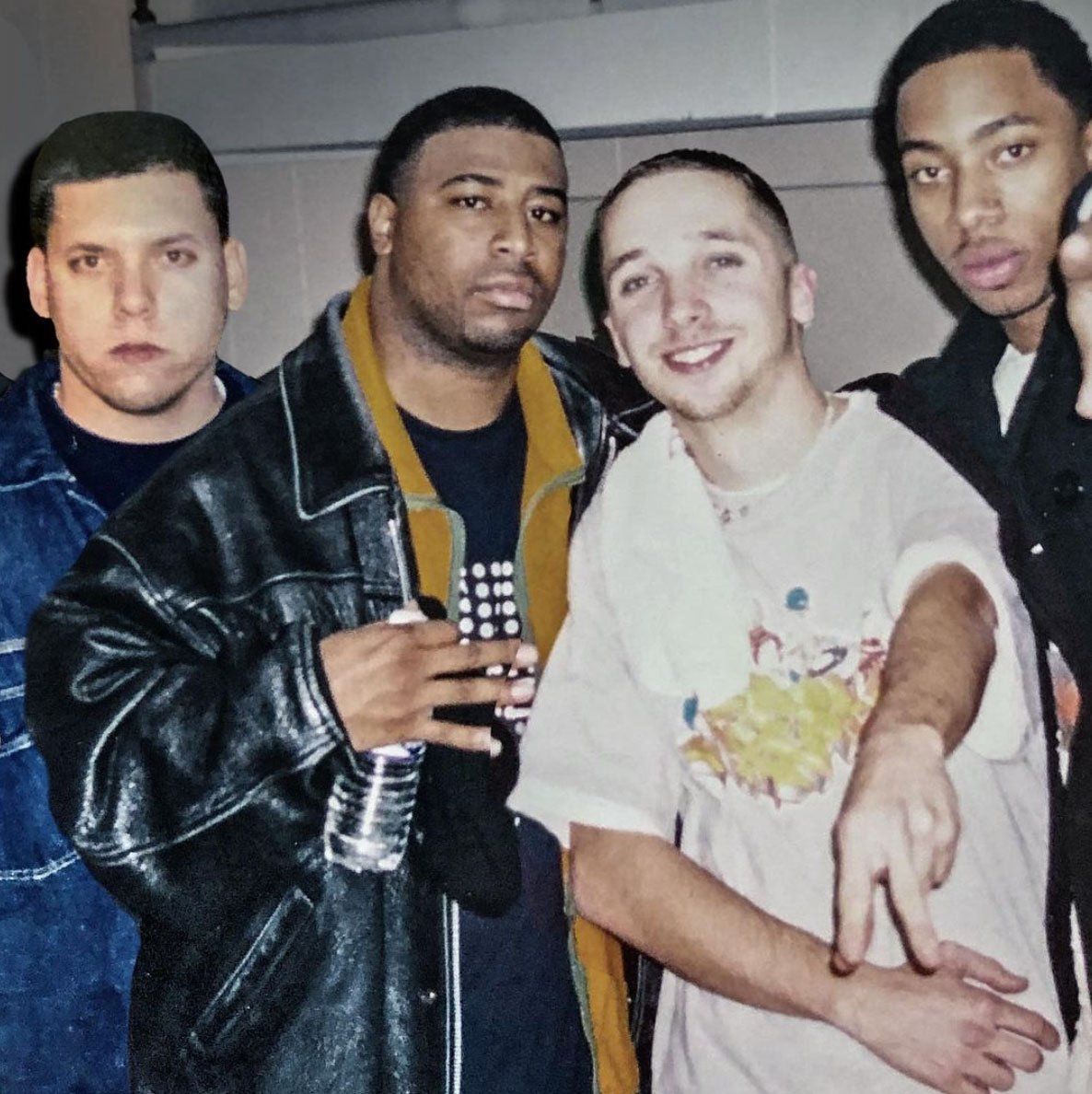 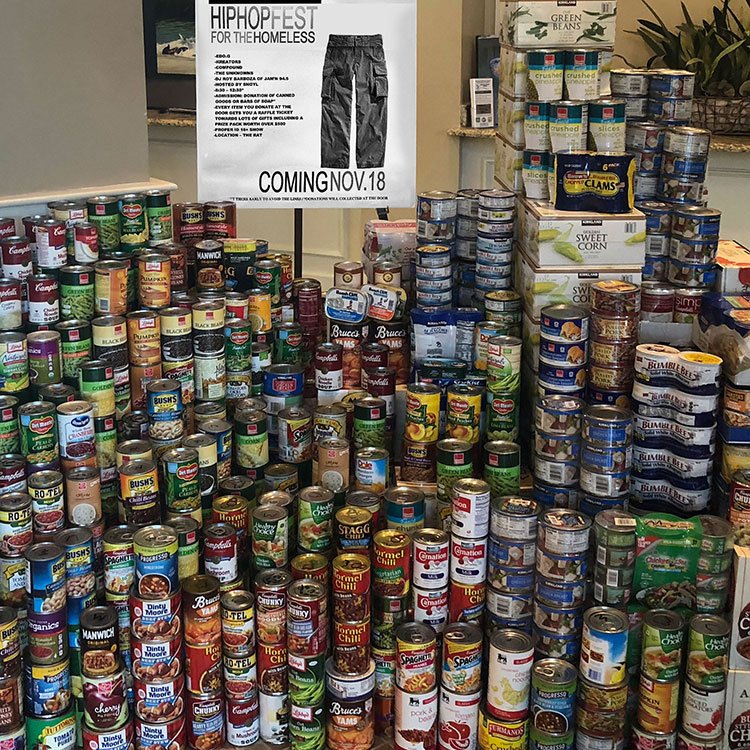 In 1999, when I was in my senior year at Bridgewater State College, I wanted to combine two of my passions. Hip-Hop music and helping people that are in need. The plan was to bring a hip-hop show to the college while at the same time raising awareness and collecting donations for a large local homeless shelter.

I named the event “Hip-Hop for The Homeless” and with the support of the college’s Program Committee I booked Boston legend Edo.G, The Kreators Clinton Sparks & Dj Roy Barboza. I did the event flyers and posters and at the time, likely used Microsoft Paint.

Admission to the show was canned goods and bars of soap which I had coordinated ahead of time to be donated to Father Bill’s Mainspring House in Brockton, Ma. As a way to maximize the donations gathered, I positioned admission as each item you brought to donate got you a raffle ticket towards a huge prize pack of music, merch and goodies that was collectively donated by Rawkus Records, Undergroundhiphop.com, JAM’N 94.5, The Source Magazine, Tommy Boy Records and others.

The donation of tangible goods in exchange for admission to an event is something that I think needs to be done more often than it is. There is something different about donating physical items as opposed to “money from the sale of your ticket will go towards supporting X,Y,Z.” It’s more personal. More direct. It’s similar to the feeling of buying and bringing a toy to the Toys For Tots box as opposed to dropping change into the Salvation Army red bucket on your way out of the supermarket.

That year, before I graduated with my BS in Mass Communication, I was presented with the 1999-2000 Community Service Event of the Year Award by the college, which I still proudly display at my design studio. It was one of the many proud moments in my career (early career) and reminds me today how much I miss the golden era of hip-hop. I also am missing small intimate shows like this in our COVID world. Some day (hopefully soon) we will be able to get back to having events like this that bring young people together to celebrate music and culture, all while helping our neighbors in need. 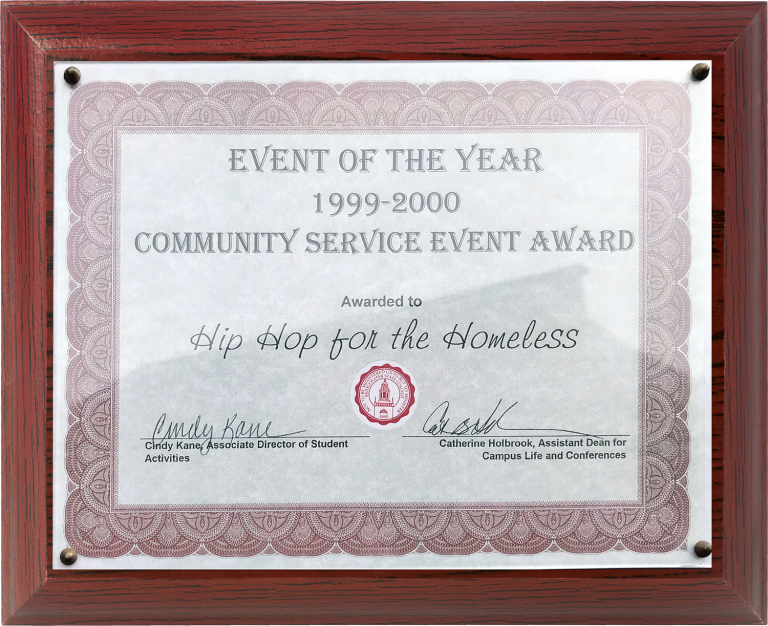